They Are Breaking Commandment #9 AGAIN!

Here's a statement from the A.N.S.W.E.R.(aka neo-nazi) Coalition:

"The forces of ultra-right racism and militarism tried to "Swift Boat" the Washington protest. Wrapping themselves in American flags, groups like Rolling Thunder pretended to "defend" the Vietnam Memorial from threats that they themselves totally fabricated."

We fabricated the threats?? Ah...how about some evidence:

Why I Went to Defend the Vietnam Veterans Memorial Wall

Here's an excerpt from a page showing dozens of war memorials desecrated across America:

"If Vandalism Is Not Enough To Convince You, Read On!
Are They Anti-American or Did They Just Stop Taking Their Medication? "

"I keep reading how defenders of cop-killers and other radical wackos trying to take over our government disguised as protesters, have no plans to deface the memorials in Washington DC during their march, but there was too much evidence to believe otherwise.

"I'm convinced that Answer Coalition is not only a pack of extremely frightening sickies, they're also:"

By the way, this Cholly Manson had a MySpace page advocating Hitler and other disturbing videos and graphics, but MySpace finally did something right and removed his site.

And the neo-nazi Anti-American traitors say that the Gathering of Eagles were the "sideline fascists"? These people should all be locked up in a looney bin. What are they all suffering from PPD like Andrea Yates? You think these freaks aren't capable of drowning kids? Think again and choose your friends wisely is what I always tell my kids.

Look Out!! These people are ticking timebombs about to blow!

These traitors are trying to advertise that what we did in support of the troops was irrelevant. It was nothing of the kind. We'll be at every major protest from now on.

Looks like the cheese has finally slid off of Hanoi Jane's cracker. Take a look at this dandy photo: 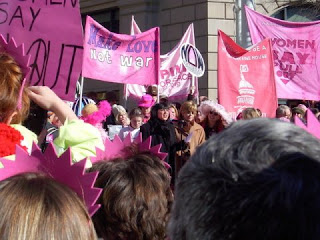 AND WHY IS THIS GUY WEARING THIS OUTFIT?

Was he on his way to a 'civil union' as the best man AND the maid of honor? Did he instead decide to attend an-anti war protest? Or was it Bush that bothered him/her? The words 'impeach bush' sprawled across the fake boobies is misleading!