Our Leader and Our Allies' Leader Need Our Support 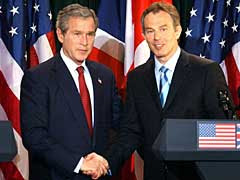 President George W. Bush and Prime Minister Tony Blair need to have the support of their countries in these critical times. President Bush's Congress has driven a knife in the backs of the US Troops in Iraq, and they are telling the troops and the Iraqi's to 'drop dead'. Congress has turn its back on our armed forces and are setting us up for big problems with Iran.

Prime Minister Tony Blair needs the support of his country and of the United States. Great Britain is this country's best friend and strongest ally. Whatever President Bush decides to do to help bring the British Sailors and Marines home, that are being held hostage by the most dangerous man in the world, the president of Iran, we should stand behind him 100%!

It appears that Iran is looking for a showdown. He watched and waited for Pelosi and her gang of leftards and some rightards it seems, to announce when the U.S. will be out of Iraq, meanwhile planning his takeover of that country once we're gone.

Pray for the Unites States, for Great Britain, and for the world. Things are going to get ugly in a hurry. If you do not agree, visit the following websites and read what can happen, what may already be happening.

If you think America and Great Britain are not dealing with a lot of wacky sociopaths, read this article:

BAGHDAD - Police said Wednesday that children were used in a weekend car bombing in which the driver gained permission to park in a busy shopping area after he pointed out that he was leaving his children in the back seat.

The entire story can be found at: Military.com
Posted by chats at 7:25 PM

I have told some other nutballs on my blog that whether they like it or not this is the way it's going to go down, all this crap started with Iran and will end with Iran and you can either back us and support us or go with the terrorists.

I hate the thought of our fellow Americans even being on the side of the Terrorists. But that is the road they have chosen and now they are the enemy also.

I fully support President Bush, and PM Blair, but I do NOT stand by this Democratic controlled Congress.