Is There One Commandment out of Ten the Anti-American Traitors Haven't Broken? Decide For Yourself!

On March 17, 2007, I saw the largest group of degenerates and weirdos all in one place, than I have ever seen in Washington, DC. They were the people I also heard others refer to as being at the bottom of the food chain.

Plus they are not very good at photoshopping. {I don't mean buying photos, I mean cropping and pasting to create an illusion} Here, I'll show you what I mean: 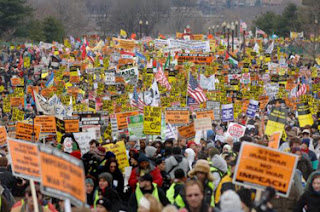 This photo reminds me of the old "Hidden Pictures" puzzles that used to appear in Highlight Magazines. You had to find things hidden within the photo. Ready?

First of all, there were Vietnam Veterans, WWII Veterans, even a couple of Korean Veterans, joined by Americans who support the veterans and our US troops, lined up on the right side of this photo, where the lamposts are. To illustrate further, here is a photo of the designated areas we were given permits for that day:

As you can see, the Eagles were lined up there, not the moonbats with blurry cropped photos of their stupid bright yellow signs. (that's right, yellow, as in belly)

Secondly, see the American Flags mixed in with the Anti-Americans? There are so many things wrong with that, I don't know where to start. But this is a good a place as any: If there are ever any US flags in the hands of the traitors this is what they usually do with them: 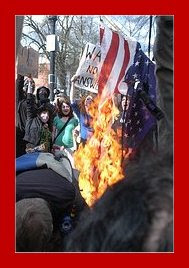 So, let's see; the moonbats have lied, they have deceived, they frequently grabbed US flags from the hands of veteran supporters and ripped them up, and the men in the anti-crowd wearing the pink clothes and the rainbow-colored clothes must be breaking a few commandments all at once. So is there anything I've missed?

Oh, wait...now that General Pelosi has announced to our enemy that we'll be pulling out, there will not doubt be murders committed. Whether it be the lives of our US troops, or of Americans right on our own soil {you remember 9/11 right?} it will still be murder and the blood will be on Pelosi's hands as well as on the hands of the moonbats. So I think they will have broken every Commandment. What do you think?

I know he thinks I'm right: 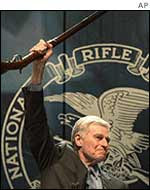 Moses wouldn't lie!
Thanks to the following for the graphics:

The Gathering of Eagles
Mr. Smash Goes to Washington
A random image on Google...oh,
and the Moonbats at A.N.S.W.E.R.
Posted by chats at 3:25 PM