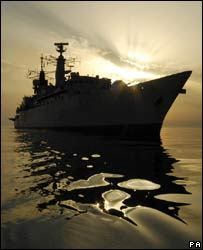 Eight Royal Navy sailors and seven Royal Marines were seized by the Iranian Navy Friday at around 10:30 a.m. near the disputed Shatt al-Arab waterway, while searching a merchant ship. Iranian vessels surrounded them and escorted them away at gunpoint.

To further illustrate what a mistake Pelosi and Congress made yesterday by announcing a date for complete US Troops withdrawal from Iraq, yesterday 500 or so Iranian students stoodd on the shore where the soldiers were captured, and shouted “Death to Britain” and “Death to America”.

Ms. Pelosi might as well have been standing on the shore with them.

Visit the websites for our friends and allies, also in harm's way courtesy of Ms. Pelosi:

Side note: This fly-in-the-face treachery is no doubt a result of the more severe sanctions imposed on Iran today. President Ahbob saw it coming and decided to try and get himself some bargaining chips. Let's hope this situation is settled more swiftly than the good ol' boy Jimmy Carter's approach to The Iranian Hostage Crisis, November 1979 - January 1981

MARCH 25, 2007
Now word has it that Iran is treating the kidnapped British Sailors and Marines as criminals, charging them with espionage. They will, as I predicted, use them to blackmail the UN Security Council into lifting the sanctions and continue negotiating. You cannot negotiate with terrorists or madmen. Iran's government is lead by both of those elements. Wonder who will make the first move. If we're smart it will be Great Britain and the U.S.