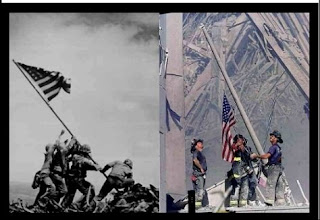 "One ought never to turn one's back on a threatened danger and try to run away from it. If you do that, you will double the danger. But if you meet it promptly and without flinching, you will reduce the danger by half." ~Sir Winston Churchill-British politician (1874 - 1965)

Pelosi's Cut-and-Run Bill, also knows as the "Drop Dead U.S. Troops" Bill, has sent a clear message to our armed forces, and to those of us who support our troops in harm's way.

In an Al-Jazeera newspaper in Iran dated 3/23/07, guess what was on the front page?

"Pelosi had to canvas support from sceptical Democrats to get the necessary votes. The US House of Representatives has voted to impose a September 2008 deadline for withdrawing all American combat troops from Iraq."

It is not surprising that this made the front page. That's what Mahmoud Ahmadinejad wanted to hear, he wanted to know WHEN our troops would be getting out of Iraq. Gee, I wonder why he wants to know?

Strangely enough, Ahmadinejad's navy kidnapped 15 British sailors and marines on the very same day. Bold move considering he cancelled his trip to come to the US (letting him come here is a joke in, and of itself) to speak at the United Nations (the UN being an even bigger joke) about the nukes he is building up to use against the United States and Israel.

When the first mushroom cloud hits the west coast of the US, who will Pelosi call for help? When the anti-American crowds in San Francisco and in Portland, OR, find their state uninhabitable for decades due to radiocative fallout, who will they go to for help? Will they blame Bush like they blamed him for Katrina, a NAUTRAL disaster?

I am willing to bet there will be another massive terrorist attack on US soil, shortly after our troops are yanked completely out of Iraq by an irrational female and her flock of sheep. A ficitonal character, a terrorist, on the show '24' said it best, "they are being led to their own slaugher!" He was right! Even if it was a television show, there is truth in that statement. After today's disastrous passing of a bill that puts our troops in even more harm than they already were, I see some 'leading' going on, don't you? Don't blame me!

Hey, I didn't vote those weasels into Congress. What a woman on the far end of her menopausal cycle, is doing as Speaker of the House, is beyond me. I didn't want her there.

To think they could put a completely insane woman 3rd in line for the Presidency of America, is frightening. And today's passing of the cut-and-run bill proves just how well-founded my fears are.

Pelosi and her cronies might as well grab a couple of canisters of chemical warfare from the Iranian nutjobs, and start killing Americans. This way is a slow death, just waiting to see what Iran will do when the 'deadline' for troop withdrawal out of Iraq arrives.

God Bless America! God Bless the US Troops! And God Help Us All Now!!

Visit the websites of America's Armed Forces, and offer your support: